As the move to the cloud accelerates, a high-performance cloud network interconnecting applications and users is a key requirement. Enterprises and other organizations, including those in government and education, are building fully distributed application environments that can run in private, public, and hybrid clouds to include edge locations. The lack of a secure and agile cloud network solution is a barrier to this transformation. Legacy network architectures are designed for self-contained enterprise networks connecting to private clouds. While this approach has been repurposed for public cloud environments, it is not optimized for cloud-native networks and workloads.

To support the growing diversity of clouds and application infrastructure the connectivity layer must be table stakes: the conversation must move to performance, reliability, and built-in security. Enterprises need comprehensive visibility, monitoring, and proactive network operations to ensure a successful migration to a cloud-native paradigm.

Where is cloud networking today?

According to IDG’s 2021 cloud computing survey, 92% of organizations’ IT environments are at least somewhat in the cloud today with more than half (55%) of organizations currently using multiple public clouds; 21% say they use three or more. Though architectures have evolved in other areas to support this transition to multi-cloud, the network has fallen behind. Deploying cloud networks within existing architectures is complex, inconsistent, and costly. Increasingly distributed applications across multiple clouds demand automated, secure, and high-performance multi-cloud networking.

The need for App-to-App Transit

Why is a full-stack cloud transit needed?

IaaS, PaaS, and application endpoints need to communicate at various levels. The IaaS apps running in a VPC or VNET need connectivity, security, and optimization at the network layer. PaaS or serverless can only be attached at the application layer using a FQDN. Operating this complexity increases magnitudes as enterprises move across other clouds and regions.

To ensure the consistency and simplicity of their cloud environment, enterprises need to build an intelligent fabric that seamlessly interconnects these services and understands applications to ensure security and performance.

What can the full-stack cloud transit deliver for enterprises?

A consistent architecture reduces the complexity of connecting applications, services, and networks across clouds while addressing operations, security, and performance requirements. This architecture delivers the following outcomes:

Prosimo’s network transit is built on an elastic Kubernetes architecture that works on the principles of cloud-native infrastructure. Whether you are using Transit Gateway in AWS or VNet peering in Azure, Prosimo orchestrates the connectivity between functions and clouds, selects the best possible path, and then provides you with a global view of your cloud networks and apps.

Key Benefits when you build your network transit using Prosimo:

With IP layer multicloud networking you may connect your application islands at Layer 3-4 using IP subnet and port information through Prosimo cloud transit. Zero Trust policies ensure bi-directional communication between authorized IP subnets, and target port numbers are enforced at every AXI edge. Additional details regarding this feature include:

Prosimo caters to these requirements by using a special component called a Prosimo Connector.

What does the connector do? 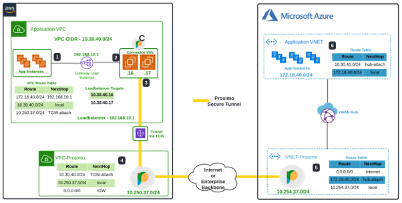 Note: Connector VMs forward the traffic directly to the App instances in AWS once it’s received from the edge gateway in AWS.

You may use cloud-led onboarding across globally distributed regions using which, different app teams can create new VPCs or VNETs. Cloud infrastructure teams can leverage a single resource to track infrastructure and onboard from any cloud, any region to the transit.  Prosimo provides the following services to facilitate onboarding of cloud assets:

As seen in Figure 10, the Cloud Asset Discovery displays the available VPCs and VNETs as well as their respective subnets.

Refreshing the view will discover any changes to the cloud asset inventory as shown in Figure 11.

As you complete the discovery of cloud assets, you may now onboard endpoints via their subnet(s), individual IP addresses, or a range of IP addresses. Traffic flow is bi-directional by default; you may send traffic from the source application towards the target application and vice-versa.

Keeping in mind the previous AWS to Azure traffic flow:

Note: Specific controls can be added via Policy under the network section to ensure only certain IP ranges and port numbers are made accessible.

The post Tech DeepDive: the why and how of Prosimo network transit appeared first on Prosimo.